There is this theory that most rappers want to be baskteball players and that most basketball players want to or do some rapping on the side. The same can be said of actors and actreeses who either sing or rap. Janet Kirina aka Nariki has been dazzling people on the screen with tons of movies to her credit while also singing on the side.

According to Nariki “Niingize box is a street sheng’ language in Nairobi meaning “TO WIN A GUY’. Nariki describes her kind of man who is hard to get in current times..

Does Nariki have what it takes to survive in the developing music industry. Kudos to her team for the excellent single promo pictures. 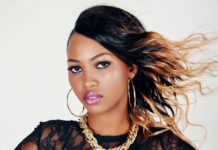