Nonini has been pushing this song for quite a bit, probably more than any of his other songs in a while. Its a message driven song which is featured on his 3rd Album release titled “godfather of Genge” Colour Kwa Face features Christine Apondi on the hooks and is produced by world renowned Musyoka of Decimal Records.

Nonini has been an active advocate trying to create more awareness to whats happening in Tanzania and other parts of East Africa with regards to albinism. On May 4th 2011, the day was marked the National Albinism Day where and when Nonini joined ASK among other people living with Albinism to walk in the Streets of Nairobi to give support and encouragement as well as provide the much needed awareness to stop discriminating people living with Albinism. The song really urges all East Africans to celebrate their differences. In Tanzania especially Albinos have been a great source of discomfort and discrimination as many were being killed for their body organs and so forth… Google the term + Tanzania and you can read more on the situation. 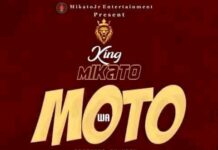 X-ray King and Tonny Syumah – Only Man Up