Update May 29th 2015: Let me vent out on this post.
It’s something I’ve shared throughout the years. Kenyan artists claiming Dj’s do not promote their records, while the artists themselves make it SO DIFFICULT for djs/promoters/blogs to get access to their music. Case in point is this record by Kush Tracey “Hauwezi Ni Dandia”. Five djs have already hit me up asking for the audio wanting to add in in their music playlist rotation and I had to disappoint all of them telling them I don’t have the audio.
Maybe it’s something I will never understand but to me it’s makes no logical sense. Why put a record on Soundcloud and disable the download link.

With permission, see what a popular Dj in the Diaspora had to say

No wonder m nigeria kama wizkid ama davido aki release ngoma kenyan djs get it very fast and play it coz it’s easily available, downloadable vi rahisi. Lakini hawa wakenya they make it hard for djs to get their music halafu wana complain when their music is not played

Kenyan Kush Tracey is with a reply track to Kristoff’s Dandia with her own take “Hauwezi Ni Dandia”.
This is what she had to say on the record

Speaking on behalf of other women,we need men to respect us and also know that we ain’t cheap. As women we have a say when it comes to such situations and apart from that; I was making a statement that we can choose to say yes or no,it’s a song that people would love to hear and bump to, considering the original one was a hit. I just did the reply for all the ladies. The whole point is to entertain and there is no beef between Kristoff,Frasha and Rabbit, and Pacho.

If you liked the original, you will definitely like this 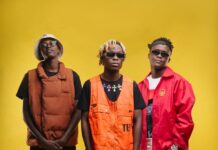