Levis Brown (Kachaa) also known as Azhar Kifuso Mwanjala is a Kenyan Genge/Hip-Hop recording artist from the Coast but based in Nairobi. He has been recording with various studios, and his first single was called Africa. His first record was back in 2015 and he is now signed under Bafa Music Group. His first single “KUKUCHE”, a feel-good dance/club song under #BMG is produced by Dweed from Tanzania. Kukuche is the 2nd release from Bafa Music Group. KUKUCHE Credits: Produced by: Dweed Video Shot and Directed by Brain Works. Distributed by: Hubern Communications 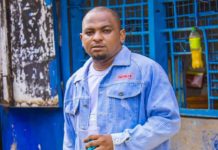