Cloud Tissa is one of the artists who I admire coz of his amazing work ethic, consistently and artistic maturity with every new album. He is also one of the artists who “spends money to make money” and has embraced the “Internet” in pushing his music. He sent me 9 new exclusive tracks of his coming album “Physically Fit” (Release date : Summer 09) and from what I’ve heard so far, the album is a must listen. The new album features Nameless, Wyre, Risasi, C.L.D and Didier Wayo , while on the production side we have Eric Musyoka, “R Kay” Kimanzi, Julian Hruza and many more.
He just finished shooting the video for the first single “Huyo Dem” Feat. Risasi which I will be showcasing next week.

He had released this song “All Over” featuring Tanzanian artist G-Solo last year and also had a video to go with the song. The video was # 1 on EATV on their top 20 video countdown for 4 weeks in a row. 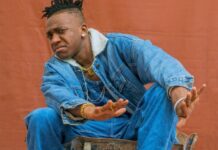