New one from Gabiro Mtu Necessary. From the press release

2019 has been a year of work and more work for Gabiro Mtu Necessary as from January when he released his collaborative tune ‘Nitembezee’ in which he featured talented super star Kidis the Jembe at a time when Kenyan artists were championing for more play of their sound on local media giving the song enough spacve to get airplay and features in various media. It is so far his most viewed music video as per YouTube statistics on his channel this year.

As ever, Gabiro’s charming lyrical prowess is the star of the show, always delivered without a hint of strain. Lyrically, Gabiro mines a personal mood for inspiration, but contrasts the somber subject matter with a light and breezy delivery that will make you forget your worries in an instant — as long as you don’t listen too closely to the lyrics. Equally, the Crizo Mzeyah visuals emphasise the simplicity, mixing in footage of random dancers with a hood-looking Gabiro and some imagery to maintain those contrasting themes.

Fronted by a captivating whistle melody and pulsating dancehal beat, “Kus Kus” puts forth a dominating sound from Gabiro. Full of charismatic verses and a fierce, brassy dance break that leads into the chanting choral refrain of “rata tat tudum,” he spends the track confidently expressing feelings of joy and rejoicing.

Born and raised in Kisumu Gabiro has not only had the chance to work with Kidis but also big names like Wyre, Ketchup and even Uganda’s Nutty Neithan;he has released 4 singles this year, barely pausing for breath in between drops. And it’s only August. Now he’s back with yet another gem and he’s tapped up music maestro and hit-maker Brian Robin of One Vibe Africa for production.

Accompanying the track, which officially dropped earlier today, is this video directed by Crizo Mzeyah. Taking a much simpler turn, “Kus Kus” brings in a feel good mood. As he explains, the song was inspired by Tamale word Kus, and sees Gabiro draw rhymes using the word which is a form of expressing sweetness. 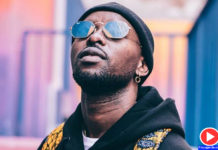