Urban folk Kenyan performing artists, the Red Acapella announce the release of “NYAYO” following their recently released collaboration with H_art the Band dubbed “TENA NA TENA.”
With this as their fourth year of pursuing music full-time, Red Acapella continues to impress its way into the hearts of our independent music scene. With music that’s known to strip listeners bare, the band says they took the same approach while songwriting for “NYAYO.”

“We wanted to write what was true to us and what we thought people might enjoy and relate with as well. #Nyayo is especially meant to encourage all of us to be true and proud of who we are as we aspire to be the best version of ourselves. It’s unfortunate that most of those in our generation and the next think it’s not cool to be true to who you are. It is. Originality is the new ‘cool.’ Our authenticity is what makes us unique but you have to believe in yourself, always be willing to learn and continue mastering your craft. Those who seem to be motivated by taking a great idea and turning it into reality are the ones who end up acquiring significant wealth. Keep putting in work, it’s a slow process but quitting won’t speed it up. If you work hard enough, you can have a successful career doing something you love, on your own terms. Always be content with what you have as you look forward to better days. It also reminds the 80s baby_90s kid of the Nyayo era. A time that’s associated with political injustices but also had its perks like the free milk program in Primary schools that began in 1979 during the reign of former president Daniel Arap Moi, then known as maziwa ya Nyayo. A means that was used to boost morale amongst students. 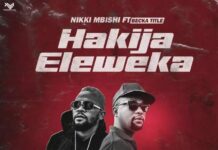